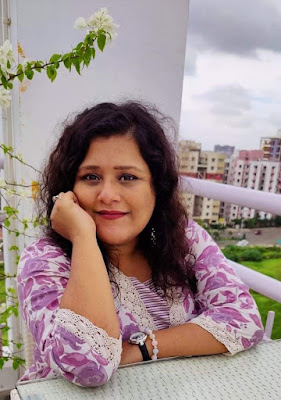 Poorna Banerjee writes about food, travel and other things on her blog Presented by P. Her poetry emerges from strange notions and missed chances, and she writes poems to honor those thoughts.

Out by the sea,

I cooked up a storm

Of fish and mussels and prawn

Bathed in sauces, slathered with dips,

On their own, raw

I never tasted any of it,

Came into the dining room.

I forgot to add the salt.

I tasted, and found

He was right, I was wrong.

I went into an anaphylactic shock

(You see, I’m allergic to fish and mussels and prawn).

The second time it happened,

I missed taking out the spine

The most telling mistake of them all

He made a face,

When I came about,

The nurse at the hospital said, “You again!

So, the third time,

I made an effort,

Then, as luck would have it,

I made another mistake,

Ate him, with all the hunger

I had inside, bubbling up.

I ate his brain first (bit through the cranium at my excitement),

Then his tongue, his lips,

I ate him, limb to limb

But still, this hunger

That made me drown my sins

Every night, I would wake up sweating and shivering,

The voices inside my head would say,

Till all I had with me was the empty shell

The bones of contention if you may,

Duly chewed, but remained there

(What will the neighbours say if they see me throw it all away?)

So, I keep chewing and gnawing and biting

And I know I have crushed them all.