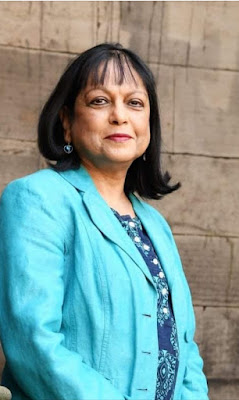 Bashabi is a poet, children’s writer, editor and academic. She is the recipient of a CBE (2021 Queen’s New Year Honours) for Education, Culture and Integration and has been declared Outstanding Woman of Scotland by Saltire Society in 2015.  Her other awards include Kavi Salam from Poetry Paradigm and Voice of the Republic in India in 2019; the Word Masala Foundation Award for Excellence in Poetry in 2017; Special Felicitation as a Poet on International Women’s Day by Public Relations Society of India, 2017; Rabindra Bharati Society Honour, 2014; Women Empowered: Arts and Culture Award in 2010 and the AIO Prize for Literary Services in Scotland in 2009.

Bashabi has authored and edited 23 books, published several articles and chapters, both academic and creative and as a poet, has been widely anthologised. Her recent publications include Patient Dignity (2021), Rabindranath Tagore, a critical biography (2019), The Ramayana, A Stage Play and a Screen Play (2019) and My Mum’s Sari (2019).

When you walk beneath my boughs

They make a canopy above your gaze –

So intricate that the sky appears in glimpses

And if you invade my domain

You will find your steps impeded by the foliage

That flourishes between the stalwart trunks

Of my populace – this earth’s rich heritage.

You can feel the deep silence of my presence

Which embraces your every alert sense.

This is where the leopards lurk

The deer stand still or leap away,

Here I have the foxes’ den

The pheasants’ call, the rhino’s horn

The bison herds between my bark

And birds of every hue and cry

Amidst my intense density

And blooms that vie

In shape and colour

To attract and capture

The insect life that is enraptured

By the habitat I provide.

But you have set a tidal wave

That sweeps under the forest glade

Pushing my treeline back

To the edge of life’s brink.

You have cleared me to plant cash crops

You have cleared me to graze cattle

You have cleared me to cultivate

You have cleared me to build your homes,

Your roads, your factories and fires,

To paper walls, to write your tales,

To feed your staggering race

That overfills this planet’s face.

You have set in motion soil erosion

You have let landslides, mudslides crush.

My roots that keep the earth soil porous,

Now removed, cause floods that flash.

I release your precious oxygen

You slash at your very lungs

With every tree you crash for gain

As the air above turns heavy with

Every day you calmly clear

Of virgin forest that today stand

Between you and your destruction.

This is a war you now wage

That bare the earth’s surface –

Till in a hundred years from now

My forests will exist no more

Replaced by a silence

The forest calls out from its still centre to the leaf of the book  that came from its heart, in the silent scream of a shared creative agony

Of the dark bark

A voice to spill